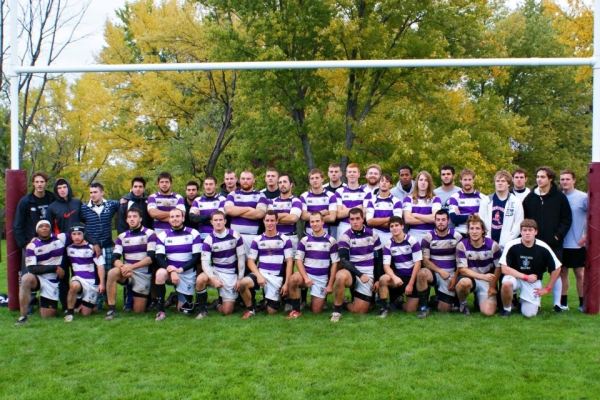 Rugby has been labeled an “emerging global sport” with participation increasing faster than all other sports in the United States with an 81% increase from 2008-2013 compared to American football, which fell 21%. And in 2016, rugby makes its return to the Olympic stage.

Currently, there are over 500 colleges that offer men’s rugby as an activity for students to participate in from elite levels, to recreational rugby conferences throughout the United States. The Niagara University Men’s Rugby Club was founded in 1976, which makes it one of the oldest institutions on Niagara’s historic campus and is partially supported by the University.

The program is strongly supported by the 100s of Alumni who developed one of the strongest Alumni Associations associated with Niagara University. Two $1,000 rugby scholarships (Lt. Terry Crowe Memorial Scholarship and “The Founders” scholarship are offered annually by the Niagara Rugby Alumni Association to current players with plans to begin another for incoming freshman in the coming years. In addition to scholarships, the alumni association has assisted with purchasing permanent goal posts and ensuring that rugby stay on Niagara’s campus with the full size grass rugby pitch in the middle of Niagara’s campus that is currently used by the team, purchasing new uniforms, a state of the art scrum machine, alleviated travel expenses, and annually fundraise to ensure the program can always travel to, and compete with elite competition to continuously elevate the program.

In addition to the grass field, the rugby program has access to a newly constructed lighted turf field, athletic trainers, and strength and conditioning programs. Niagara has developed a rich rugby tradition on Niagara’s campus playing at least one regular season home game on a Friday or Saturday evening ‘under the lights’. These “Rugby on the Ridge” games consistently see attendance in the several hundreds and is truly a campus wide event, with students and faculty alike well represented.

In the fall of 2008, the rugby program moved from Division III to Division II, a move based on the success of the program following a reign that lasted 4 years as undefeated in regular season from 2004-2007 outscoring opponents 730-85 for a 645 point differential. The time in DIII was concluded with a win at the 2008 New York State Rugby Conference Collegiate Championship in April of 2008, entering the tournament as a DIII program and winning the DII bracket.

Since 2008, Niagara has seen continued success in DII with undefeated regular seasons and 4 consecutive appearances in NYS playoffs and in 2013, a NYS championship with a National Championship Playoff berth into the National Collegiate USA Rugby Sweet 16 which ended in last minute loss to Coast Guard Academy.

If you are interested in a student-athlete experience, we are interested in learning more about you. We are seeking high school and college-transfer athletes who desire a full college athletic experience -- those willing to work hard to be a part of a college rugby program that seeks to compete on the national scene. We also want to help prepare athletes for a career in rugby beyond college - whether that means a top club, an overseas club, or even Olympic aspirations.

Rugby experience is great, but it is NOT required. If you are a high-level athlete who wants to continue your athletic career, college rugby offers many unique opportunities not found in other sports. American rugby has seen several terrific non-rugby athletes make the jump into international play very quickly. It simply takes desire and the willingness to work hard and learn.

Contact us today to answer any and all questions and to set up a campus visit that includes meeting rugby staff and current players, touring athletic facilities, a campus tour by a current Niagara student, and a meeting with our admissions counselors to work out scholarship/financial aid